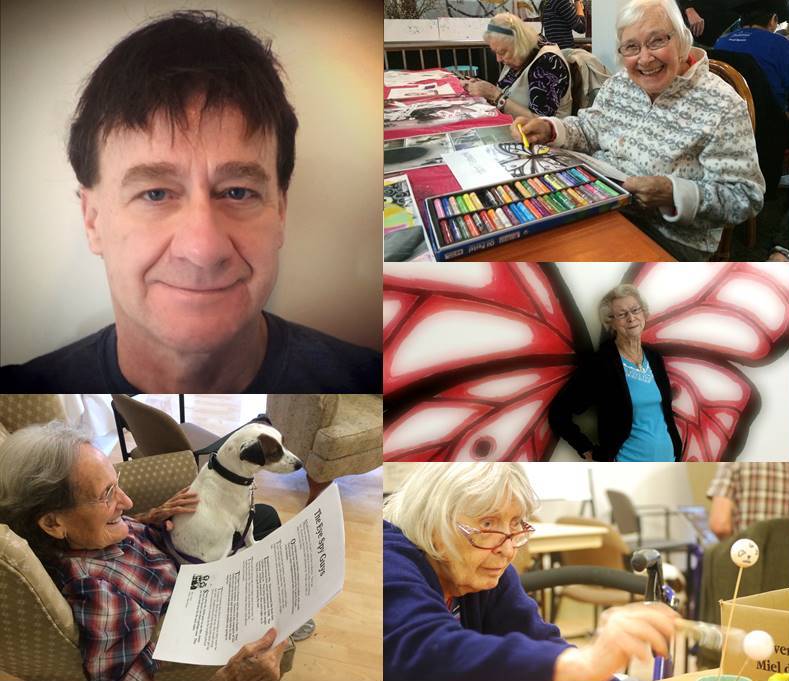 We are all so proud of Bruce Devereux who will be the recipient of the BC Care Awards 2017 Innovation of the Year for his work at Christenson Village in Gibsons, BC.  A long list of community partnerships has helped Bruce bring his passion for film and audio recordings to projects that engage the 140 residents of Christenson Village in creative pursuits.

In 2012, Bruce worked with local musician Steve Wright on Across the Lines, a project that helped residents create “beautiful sounds” using iPads and iPhones. Those sounds were turned into a professionally produced CD, which also features improvisation by local musicians and poetry reading and storytelling by Christenson Village residents.

A third collaboration with Gibsons’ Deer Crossing The Art Farm makes use of Anne Basting’s TimeSlips story creation process to help Christenson Village residents create original and imaginative stories. This creative care partnership with The Art Farm resulted in the formation of “The Imagination Network”. In 2015 their campus of care was a featured studio stop during Gibsons’ annual Art and Culture Crawl. Christenson Village was the first care community ever to participate in the festival, which opens about 150 artistic settings to the public. The Imagination Network comprised of Christenson Village and Deer Crossing the Art Farm has now added Douglas College Therapeutic Recreation and UBC Theatre departments as partners and collaborators. Future goals include the creation of a theatrical production that is co-written, co-produced, and co-performed by people with dementia in collaboration with professional artists, caregivers, and community members.

While “The Imagination Network” is inspired by the work of University of Milwaukee Theatre Professor Anne Basting, a pioneer in the creative care movement, Bruce and his partners feel they are taking a unique approach within BC to creativity and care. Bastings spearheaded the development of TimeSlips, a ritualized story creation model for people with the lived experience of dementia. As a certified TimeSlips facilitator Bruce has been using this method for the past 4 years to generate over a 100 stories written by residents with dementia.

Using the creative material generated by those with dementia, and seeing them as co-collaborators in the creative engagement process we are adding value to the collaboration while building community. The process of creation is important, but we view the relationship building between residents, family, staff, and community as the cornerstone to every project.