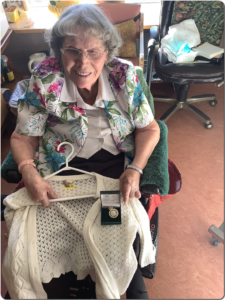 November 5-11, 2022 is Veteran’s Week in Canada. In order to honour those who have served, Good Samaritan will be sharing our residents’ stories and experiences serving Canada during the wars as members of the Armed Forces and beyond. Read Hazel Dolphin’s story below:

“I joined the service at 18 years-old and was in for three years. I knew I would be called. I wanted to be in the Navy, but ended up being put in the woman’s land arm timber corp in Britain. The idea was for women to work on the farms to free up men so they could go to war.

I was sent to a regular farm with my cousin. The farmer’s mother couldn’t afford to keep us, so we were sent to a hostel. Then I was sent to a dairy farm where I had to milk the cows. The worst part was after milking the cows, I had to go to a room inside and clean all the equipment. Then I took the milk to the road and they would go to their destination.

The weather was cold and I had to live with the farmer.  The farm owner was wealthy and owned the village that had electricity and oil lamps. I worked 7 days a week without rest. I asked if I could go home for Christmas and the response was “cows have to be milked at Christmas, as any other day. You can’t tell a cow it’s Christmas.”

I caught laryngitis and ended up having to go home anyway. After I recovered, I refused to leave my family to go back to Britain. I was called up by the agricultural board and had to go to court. When I arrived at court, I was asked to leave the room. The judge said “We listened to the story and believed your story.” I was told I had to get another job, either at the factory or as a Bus Conductor.

My parents knew people who had farms. This farm employed children from the orphanage as well as Prisoners of War (mainly Italian). I was employed at their farm helping with milking and cutting kale. The prisoners were good guys; they’d often ask us women why we weren’t married yet. I learned to plow with 2 horses. The men said “I bet you couldn’t plow with three horses. They gave me an extra horse, and managed to plow one line. However, the horses just kept going while everyone laughed.

After the war ended, I worked as a secretary. 60 years later the Prime Minister of England sent a badge thanking me for my service.”